Bestselling author Laurie Faria Stolarz returns with Jane Anonymous, a gripping tale of a seventeen-year-old girl’s kidnapping and her struggle to fit back into her life after she escapes.

Then, “Jane” was just your typical 17-year-old in a typical New England suburb getting ready to start her senior year. She had a part-time job she enjoyed, an awesome best friend, overbearing but loving parents, and a crush on a boy who was taking her to see her favorite band. She never would’ve imagined that in her town where nothing ever happens, a series of small coincidences would lead to a devastating turn of events that would forever change her life. 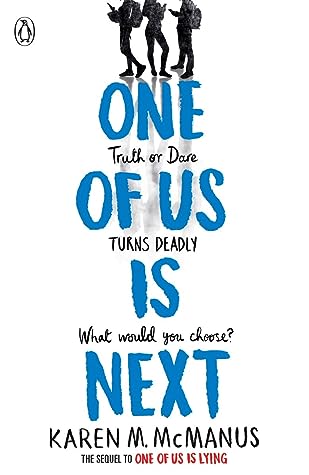 The highly anticipated sequel to the New York Times bestselling thriller everyone is talking about, One of Us Is Lying! There’s a new mystery to solve at Bayview High, and there’s a whole new set of rules.

Come on, Bayview, you know you’ve missed this.

A ton of copycat gossip apps have popped up since Simon died, but in the year since the Bayview four were cleared of his shocking death, no one’s been able to fill the gossip void quite like he could. The problem is no one has the facts.

This time it’s not an app, though—it’s a game.

Phoebe’s the first target. If you choose not to play, it’s a truth. And hers is dark.

Then comes Maeve and she should know better—always choose the dare.

But by the time Knox is about to be tagged, things have gotten dangerous. The dares have become deadly, and if Maeve learned anything from Bronwyn last year, it’s that they can’t count on the police for help. Or protection.

Simon’s gone, but someone’s determined to keep his legacy at Bayview High alive. And this time, there’s a whole new set of rules.

For fans of Crazy Rich Asians or Jane Austen Comedy of Manners, with a hint of La La Land

When eighteen-year-old Ever Wong’s parents send her from Ohio to Taiwan to study Mandarin for the summer, she finds herself thrust among the very over-achieving kids her parents have always wanted her to be, including Rick Woo, the Yale-bound prodigy profiled in the Chinese newspapers since they were nine—and her parents’ yardstick for her never-measuring-up life.

Unbeknownst to her parents, however, the program is actually an infamous teen meet-market nicknamed Loveboat, where the kids are more into clubbing than calligraphy and drinking snake-blood sake than touring sacred shrines.

Free for the first time, Ever sets out to break all her parents’ uber-strict rules—but how far can she go before she breaks her own heart?

Title – We Used to be Friends

Told in dual timelines—half of the chapters moving forward in time and half moving backward—We Used to Be Friends explores the most traumatic breakup of all: that of childhood besties. At the start of their senior year in high school, James (a girl with a boy’s name) and Kat are inseparable, but by graduation, they’re no longer friends. James prepares to head off to college as she reflects on the dissolution of her friendship with Kat while, in alternating chapters, Kat thinks about being newly in love with her first girlfriend and having a future that feels wide open. Over the course of senior year, Kat wants nothing more than James to continue to be her steady rock, as James worries that everything she believes about love and her future is a lie when her high-school sweetheart parents announce they’re getting a divorce. Funny, honest, and full of heart, We Used to Be Friends tells of the pains of growing up and growing apart.

When Amaya rescues a mysterious stranger from drowning, she fears her rash actions have earned her a longer sentence on the debtor ship where she’s been held captive for years. Instead, the man she saved offers her unimaginable riches and a new identity, setting Amaya on a perilous course through the coastal city-state of Moray, where old-world opulence and desperate gamblers collide.

Amaya wants one thing: revenge against the man who ruined her family and stole the life she once had. But the more entangled she becomes in this game of deception—and as her path intertwines with the son of the man she’s plotting to bring down—the more she uncovers about the truth of her past. And the more she realizes she must trust no one…

Packed with high-stakes adventure, romance, and dueling identities, this gender-swapped retelling of The Count of Monte Cristo is the first novel in an epic YA fantasy duology, perfect for fans of Sarah J. Maas, Sabaa Tahir, and Leigh Bardugo.