A devastating decree is issued: all Ugandan Asians must leave the country in ninety days. They must take only what they can carry, give up their money and never return.

For Asha and Pran, married a matter of months, it means abandoning the family business that Pran has worked so hard to save. For his mother, Jaya, it means saying goodbye to the house that has been her home for decades. But violence is escalating in Kampala, and people are disappearing. Will they all make it to safety in Britain and will they be given refuge if they do?

And all the while, a terrible secret about the expulsion hangs over them, threatening to tear the family apart.

From the green hilltops of Kampala, to the terraced houses of London, Neema Shah’s extraordinarily moving debut Kololo Hill explores what it means to leave your home behind, what it takes to start again, and the lengths some will go to protect their loved ones.

END_OF_DOCUMENT_TOKEN_TO_BE_REPLACED

Heartbroken by the loss of her fiancé, adventurous Anna finds a second chance at love with an Irish sailor in this riveting, emotional romance. After a reminder goes off for the Caribbean sailing trip Anna was supposed to take with her fiancé, she impulsively goes to sea in the sailboat he left her, intending to complete the voyage alone.

But after a treacherous night’s sail, she realizes she can’t do it by herself and hires Keane, a professional sailor, to help. Much like Anna, Keane is struggling with a very different future than the one he had planned. As romance rises with the tide, they discover that it’s never too late to chart a new course.

In Trish Doller’s unforgettable Float Plan, starting over doesn’t mean letting go of your past, it means making room for your future.

END_OF_DOCUMENT_TOKEN_TO_BE_REPLACED

Fans of Netflix’s On My Block, In the Heights, and readers of Elizabeth Acevedo and Ibi Zoboi will love this debut novel about a girl whose life is turned upside down after one local act of vandalism throws her relationships and even her neighbourhood into turmoil.

Chinelo or Nelo as her best friend Kate calls her, is all about her neighbourhood Ginger East. She loves its chill vibe, ride-or-die sense of community, and her memories of growing up there. Ginger East isn’t what it used to be, though. After a deadly incident at the local arcade, all her closest friends moved away, except for Kate. But as long as they have each other, Nelo’s good.

Only, Kate’s parents’ corner store is vandalized, leaving Nelo shaken to her core. The police and the media are quick to point fingers, and soon more of the outside world descends on Ginger East with promises to “fix” it. Suddenly, Nelo finds herself in the middle of a drama unfolding on a national scale.

Worse yet, Kate is acting strange. She’s pushing Nelo away at the exact moment they need each other most. Nelo’s entire world is morphing into something she hates, and she must figure out how to get things back on track or risk losing everything⁠—and everyone⁠—she loves.

END_OF_DOCUMENT_TOKEN_TO_BE_REPLACED

Title – The Gilded Ones

Sixteen-year-old Deka lives in fear and anticipation of the blood ceremony that will determine whether she will become a member of her village. Already different from everyone else because of her unnatural intuition, Deka prays for red blood so she can finally feel like she belongs.

But on the day of the ceremony, her blood runs gold, the color of impurity–and Deka knows she will face a consequence worse than death.

Then a mysterious woman comes to her with a choice: stay in the village and submit to her fate, or leave to fight for the emperor in an army of girls just like her. They are called alaki–near-immortals with rare gifts. And they are the only ones who can stop the empire’s greatest threat.

Knowing the dangers that lie ahead yet yearning for acceptance, Deka decides to leave the only life she’s ever known. But as she journeys to the capital to train for the biggest battle of her life, she will discover that the great walled city holds many surprises. Nothing and no one are quite what they seem to be–not even Deka herself.

END_OF_DOCUMENT_TOKEN_TO_BE_REPLACED 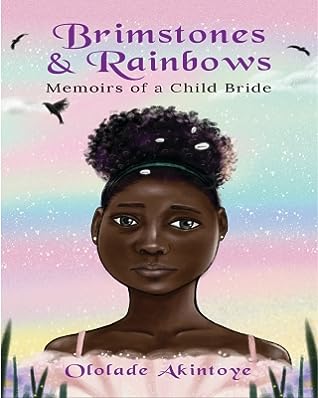 In this intriguing realistic fiction, Ruby, an orphaned child bride who suffered from Obstetric Fistula, a debilitating childbirth complication, became stigmatised and ostracised from her community. Having lost everything in the village of Ojiji, Ruby set out to the city of Eko on a path to healing and recovery and a chance to find what lies on the other side of the rainbow