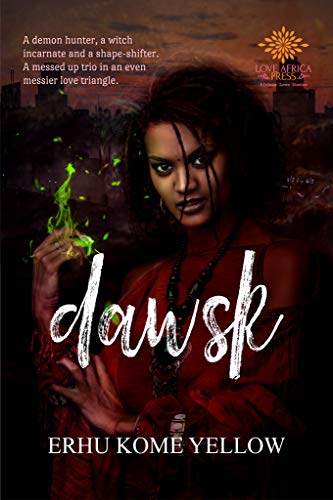 A demon hunter, a witch incarnate and a shape-shifter; a messed up trio in an even messier love triangle.

Caught between the two, trouble is never far away as she discovers some disturbing truths about her past life. A dark force is rising and the messy trio is going to have to fight, together, to save lives.

From the east, the wind rose and whipped the trees, bending the branches and leaves. Dark clouds hovered over the Meje clan gathered in the forest clearing. The powers of the spirits they evoked with resonant voices surged in their midst.

The air reeked of a foul presence. Gusts of wind screamed, making the animals scamper in fright.

The hunters of Ori clan remained still and silent, hidden in the long grass, undeterred by the bloodcurdling sounds.

As devout worshippers of Yemaja, the earth goddess had imbued them with the strength to rid the earth of the abomination that tarnished her order.

The demon hunters with their bodies painted black and white, the symbol of impending war, had in their hands, daggers with long thick horns for handles.

These daggers had been forged from the rocks in the hidden cave beneath Yemaja’s waterfall—the only weapons capable of slaying the beasts short of taking their heads off from their bodies, which proved to be an almost impossible task.

The hunters waited for the opportune moment to strike, their bodies primed for action, eager for the victory to come.

The Meje clan folk held hands firmly by the edge of the lake and chanted after their leader whose head was adorned with cowries and raffia palm.

Erhu Kome Yellow is an Urhobo author of fantastical stories where gods, mythological creatures and magic come together.

She has been shortlisted for the Syncity Anthology prize, the Quramo writers prize and featured in Blaud Magazine. Dawsk is her first book and is currently the Creative Freelance Writers Book of the year.