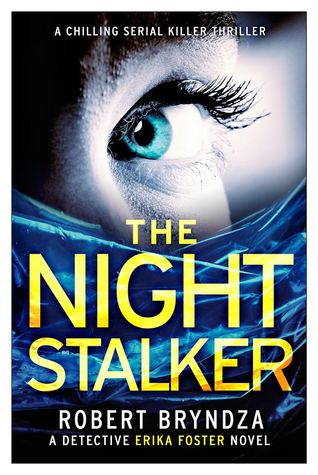 If the Night Stalker is watching, you’re already dead…
In the dead of a swelteringly hot summer’s night, Detective Erika Foster is called to a murder scene. The victim, a doctor, is found suffocated in bed. His wrists are bound and his eyes bulging through a clear plastic bag tied tight over his head.

A few days later, another victim is found dead, in exactly the same circumstances. As Erika and her team start digging deeper, they discover a calculated serial killer – stalking their victims before choosing the right moment to strike.

The victims are all single men, with very private lives. Why are their pasts shrouded in secrecy? And what links them to the killer?

As a heat wave descends upon London, Erika will do everything to stop the Night Stalker before the body count rises, even if it means risking her job. But the victims might not be the only ones being watched… Erika’s own life could be on the line.

The global bestselling author of The Girl in the Ice is back with a heart-racing, electrifying thriller. If you love Angela Marsons, Rachel Abbott and Karin Slaughter, you’ll be hooked on Robert Bryndza.

Erika Foster is a badass and awesome detective not to talk about how kickass and unapologetic she is, she’s a book role model for me. Yes it took me awhile to read the next book in her series and I apologise, this year at least Erika Robert books are the only crime-solving books or mystery/thriller books I can see myself starting and finishing the rest can’t say the same for it.

So in this book, we deal with a new serial killer and I like the twist! It’s refreshing and how everything connects eventually. I love Robert’s mind and I can see myself being a dedicated fan of his works forever.

I’m mostly happy about the end of the book, where Erika puts her feet down and not allow bs. That’s a boss lady, my role model.

I know the review isn’t lengthy but, if I wrote a long one it will include spoilers so no way. All you need to know is that this is book two of the DCI Erika Foster books. In Book 1 we were introduced to her and the troubles she faced and this book was the continuation. Aside from solving of murders which were the major highlight. I’m going to read Book 3 now, I hope if you’re looking for a thriller to read you pick this series up. It’s so worth it.

Book Review: The Girl In The Ice (DCI Erika Foster #1)