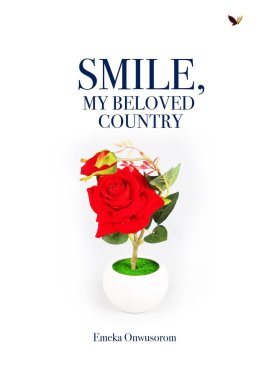 Smile, my Beloved Country is the story of a young Nigerian, Ayo Musa Okeke, who on a visit to Nigeria witnesses the assassination of a presidential candidate, Boni Konida, during a transition to civil rule programme. Within a broken country where civic obligations are ignored as corruption runs rampant, suspicions begin to point to Ayo who is saved by the friendship of a conscientious cop. From his base in New York where he is a tenured Agricultural Science professor, Ayo unwittingly sets in motion events that will lead him to face off the ruthless Chief Wewe Jumanji in an electoral battle for Aso Rock and Nigeria’s future.

Smile my Beloved Country, is a book with big dreams when it comes to Nigeria. It’s a book which aim is to inspire hope as well as paint a different picture about how Nigeria should be as it also notes many of the issues politics in present Nigeria has.

It’s about Ayo Musa Okeke, an American Nigerian man, who was given a scholarship by the government for his undergraduate program in America and used the opportunity to make a name of himself in the agricultural sector.

Ayo was finally ready to go home after twelve years of being away, and from the start, this book already started to criticize the people of power in Nigeria, such as how the infrastructures and amenities provided were run poorly.

Ayo is really a JJC, because of how ignorant he is to how things in his own country are, didn’t he follow the news, or have Nigerian friends prior to his visit? A series of events quickly follow that paints the dangers in Nigeria, that leave Ayo with a bad taste for the country where everyone he has encountered is either corrupt or too scared to voice what’s right and ask for justice.

Unknowingly to Ayo this paths leads him into the bed of Nigerian politics and puts his life in danger, but by some miracle, he was always lucky to escape with other people getting hurt in place of him.

This builds a fire within him and he decides enough is enough, so he begins fights corruption and the average Nigerian mentality, by challenging and provoking people to think and hope for a better society, the only way he can, which eventually makes him a presidential candidate and puts him up against a political opponent that is corrupt and dirty to his core.

This story is a good one, especially because of the message it’s trying to pass in the political climate in present Nigeria right now. Yet I found it very long like the story was dragging on too much because from the onset I knew in which direction this story would take and what sort of ending I would get, I didn’t even need to go far into the story before I knew what I would be seeing with each turn of the pages, because it’s a story many of us already know, I for one can see this book doing well as a movie.

Another fault with this book is highlighting and another issue at large, the way many male authors write romance is so lacklustre and unbelievable, remember that Ayo hasn’t been to Nigeria in the twelve years since he left, but he’s in love with a woman he once admired, who he watched from afar but didn’t contact and immediately asks her to marry him, because they are just right for each other, and some of the scenes between the two of them made me roll my eyes, just didn’t like the scenes of apparent romance in this book, I found it unnecessary as it didn’t add or take from the story itself.

Would I recommend people to read this book? Yes. It’s written well and has a strong message anyone can take from, as it reminds people to do what’s right, even in the face of adversity.