Q: Hello Suyi, first all thank you for agreeing to this Q&A session, I’m beyond excited to have you featured on Bookish Species. To get started, how has your authorship journey been like since David Mogo, God Hunter release? I hope it has been pleasant.

A: It has. The science fiction and fantasy community–globally–has been very supportive. Even if people had very different ways of receiving the story and the work it’s doing in the space, most have been surprisingly open to this quite tangential take on both the genre and where stories are coming from. I was at a very tiny convention this weekend and sold out to people all hearing about the book for the first time. Third sellout at an appearance this year. It’s been a hell of a ride.

Q: I immensely enjoyed reading David Mogo, which makes me curious. Can you share what switched on the light bulb behind you writing David Mogo? Your eureka moment.

A: I think it was when I crossed two unrelated thoughts that’d been permeating through my mind for a while. I was working in Lagos at the time, and seeing all of the infrastructural, socio-economic and socio-political dysfunction presents made me wonder what it would take for the city to finally break as it’s been threatening to for a long time. At the same time, I was thinking about how to write a story about gods of a Nigerian pantheon, because I wanted to see that out in the world. I realised, at some point, that a massive population spike in Lagos would be one way to force the city into a panic, into breakage, but I then wondered: what about gods rather than people? The book’s defining event of The Falling was born then, and dropping a sarcastic demigod like David Mogo into that world was like placing a sphere on an incline. The story rolled on with little effort.

Q: The process of writing a manuscript is a very large mental exercise especially for a story like David Mogo, Godhunter. How did you manage your creativity flow and overcome obstacles, when you were writing the manuscript? (Did you have like a schedule for writing, a favourite time to write, took breaks where you watched movies, read etc.)

A: I had to force myself into a schedule. I worked at 8-5 every day, but if you really know Lagos, you know that’s more like 5-8. So, when I closed work every day, rather than join the 3-hour traffic from Victoria Island to my house in Gbagada, I sat in the office break-out room and wrote until the traffic thawed. I did this out of necessity, but also as a way to constrain myself and force routine into my writing. Truth is, I could’ve waited for inspiration to strike each time, but I’d learned early on that the tried-and-trusted method of getting anything done is BICHOK: Butt-In-Chair-Hand-On-Keyboard. So I sat there and powered through each time. Eventually, I started to even make fun out of it and started a Tinyletter to that effect, called After Five Writing Shenanigans. I wrote the first third of the book then and wrote the two other parts–Firebringer and Warmonger–after the book had sold and I’d left the job.

Q: Publishing a book is no small feat, I know there’s a lot of work that goes into polishing and shining a book. How was the journey from writing the manuscript to getting it published? Let’s reminisce on this experience with you.

A: I sold the book to Rebellion during a rare open reading period–that’s when a publisher emerges from their castle and decides to read novel submissions from us muggles without literary agents. I hadn’t even finished the book when I sent the required documents and continued with my life. Then, sometime in late 2017, I got an email essentially saying, “We love this; if it’s still available, we’d like to buy it.” I was like, “Hell yeah, it’s still available!” and the rest is history.

One of the things I never fail to sound out is how much support I’ve gotten from my publisher so far: the folks on the Rebellion editorial and marketing teams are glorious. I’m very lucky to have gotten someone who understood what I was trying to do right from the get-go. They didn’t even make me “clean up” or italicise anything–not pidgin, not Yoruba (if you’re a writer from non-EuroAmerican origins, you know this struggle). They also have been staunch advocates of my career as an author, and I will forever be indebted. Even if I never publish something with them again–highly unlikely–they’ll always have a place at my table.

Q: I know you’re the writer of David Mogo, Godhunter, but I really want to know what’s your favourite thing when it comes to your book? What do you believe makes it special to you and for your readers?

A: I think the fact that I made a clear and obvious effort to keep the book unashamedly Nigerian. Even though I know it’s not quite at the level I’d dream for that to happen, I’m glad I’ve been able to put an unashamedly Nigerian fantasy book into the world that can stand proud at the same level with global equivalents. I think every Nigerian who has read it sees that. Sure, you may dispute one’s enjoyment of the story or characters, but I think it’s indisputable what this book does–it says, “Hey, I’m Nigerian, and I also have cool gods and magic and shooting up shit. Bite me.”

Q: Are we ever going to see the Lagos, David Mogo lives in again? Are you currently working on a new project? How soon should we be expecting a new book?

A: New book, yes, but not quite another David Mogo just yet. Currently, I’m working on a forthcoming epic fantasy trilogy inspired by an amalgam of 15th-century West-African empires. It’s called The Nameless Republic, and the acquisition announcement should come forth any day now, maybe even before this interview publishes.

I’m also working on the revival of a British comic called Mytek The Mighty recently announced on The Hollywood Reporter, about a solar-powered robot gorilla with African origins.

Another David Mogo book seems somewhat inevitable–heck, I’ve written a couple of proof-of-concept chapters just for kicks–but we’ll see. It’s all up to what my publisher wants.

Q: Finally what is your biggest motivator when it comes to your writing? Do you have any parting words for authors and writers who are at the beginning of their authorship journey?

A: For me, it has always just been about telling stories. I am a rebel by nature, but not quite the stand-on-soapbox activist type. I’ve decided to tell stories that fight back instead, that force people to reconsider weak or dangerous beliefs. Speculative fiction gives me room to tackle that, to present situations that might be outside of current “realistic” purviews, but provide a fresh perspective once placed in new and interesting contexts. What keeps me going is that maybe, just maybe, for every thousand persons who read any of my stories, one person’s perspective might perhaps be enriched.

“Stay the course,” is always my advice, not just to budding authors, but to everyone in all ramifications. We’re always learning, and we all stumble and face challenges in whatever journeys we take. You learn to skip hurdles better when you do it often. But if you eschew it, you have to learn all over again. So if you start something, stay the course, and finish it. Finished can be fixed, but empty cannot. You can’t revise a blank page. Stay the course. Finish that shit.

You can read my review of David Mogo, Godhunter 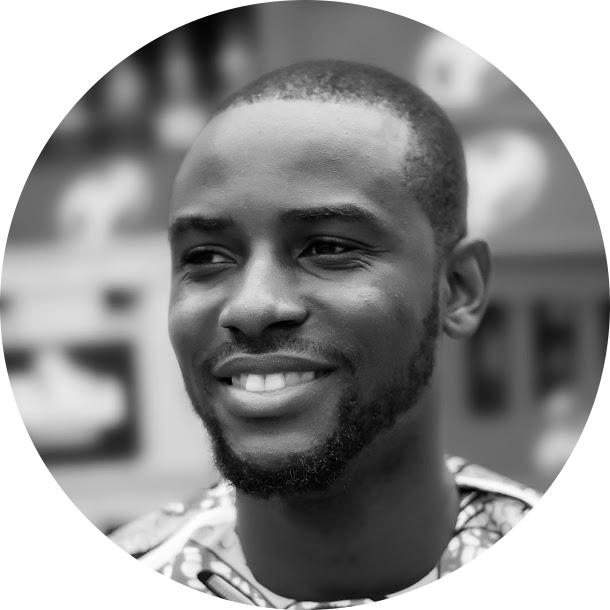 SUYI DAVIES OKUNGBOWA is a Nigerian author of speculative fiction inspired by his West-African origins. He is the author of the highly-anticipated Nigerian god punk debut, David Mogo, Godhunter(Abaddon, 2019). His shorter works have appeared internationally (or are forthcoming) in periodicals like Tor.com, Lightspeed, Nightmare, Strange Horizons, Fireside, Podcastle, The Dark and anthologies like A World of Horror(Dark Moon Books, 2018) and People of Colour Destroy Science Fiction(Lightspeed/John Joseph Adams, 2017). He lives between Lagos, Nigeria and Tucson, Arizona where he teaches writing while completing his MFA in Creative Writing. He tweets at @IAmSuyiDavies and is @suyidavies everywhere else. Learn more at suyidavies.com