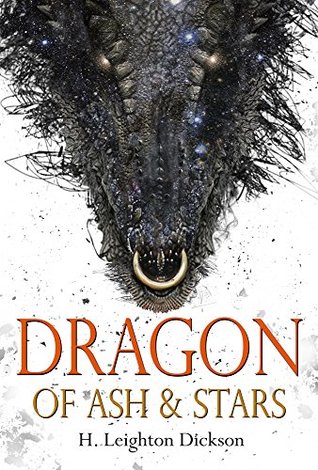 Book: Dragon of Ash & Stars: The Autobiography of a Night Dragon

Blurb: “People say that a Dragon breathes Fire. That is a myth. A Dragon IS Fire and his Whole Life is the Story of his Burning – Page by Blistering Page.”

Stormfall is a dragon born with a coat the colour of a starry night. When a violent storm strikes his island aerie, he is carried on hurricane winds into the complicated and sometimes cruel world of men. There, his journey takes him from fisher dragon to farmer, pit-fighting dragon to warrior, each step leading him closer to a remarkable destiny. But war is coming to the land of Remus and with it, a crossroads for the Night Dragon and the young soul-boy he allows on his back. How far is Stormfall willing to go in a war that is not his own?

Do you see the beautiful, scary and creepy cover? It’s so captivating.

I love dragons. So I was highly intrigued by a story told from the point of view of a dragon, yes the story pace is slow but after all, it’s an autobiography of the Dragon Stormfall’s life.

So the story had to start from the very beginning, from his time in his shell. I don’t know what era to call the time of the dragon, but humans or sticks as they were called, were very much present and causing havoc, you know how humans love to capture everything and make it meek and heel to their wishes. that’s the case with Stormfall, in his early years of age, he went through a lot and played many roles in the sticks society, before he was truly and completely free.

He connected with one stick, who would forever be his friend, companion and partner. But the dragon and the stick Rue had gone through a lot in their life, but I really could not care for the world they lived in. The world building was spectacular, but I found myself not really grasping the story behind their creation, kept confusing the names and the legend lol. Just knew as always the sticks (humans) were always warring against each other and were claiming the dragons as if they had a right to own such creatures and when all broke loose and both warring parties turned on the dragons, they had a big surprise waiting for them, I was really pleased by it.

A friend recommended this book, in a book group, I’m in for the book of the month April, but I don’t think it’s going to be the book of the month, so I read it anyway and I’m happy I wasn’t disappointed. Like I said the story pace is slow, but the surrounding of the story drew me in, especially Stormfall, I was intrigued and I wanted to know his story and he had me reading about his life till the very end.

10 thoughts on “Book Review: Dragon of Ash & Stars: The Autobiography of a Night Dragon by H. Leighton Dickson”